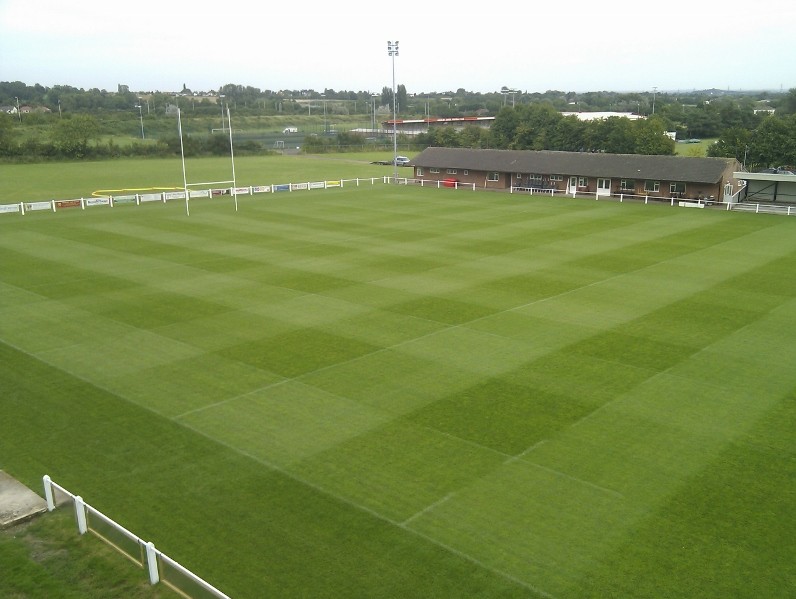 The first XV at Hinckley Rugby Football Club are enjoying playing in the National 3 Midlands League on their brand new pitch this season thanks to the capabilities and know-how of Ian Reid who runs MatchFit Sports Turf.

Ian took on the challenge of reconstructing one of two adjacent but very neglected soccer pitches, into a playing surface fit for 1stXV rugby, which were acquired in the spring of 2011.

It was a demanding and exacting task as the old pitch had suffered in the absence of any maintenance, causing a long list of ailments such as, extensive weed infestation, compacted soil, lack of nutrients, and poor grass sward, whilst the surface was peppered with rabbit holes, ruts and stones.

Ian, who had already been working with the club for two years, said “This was an interesting undertaking to successfully complete on a very limited budget. I initially surveyed the soccer pitches with Keith Kent from Twickenham but it was obvious they would need completely reconstructing.”

Following this Ian quickly set about gathering as much information as possible; soil compaction depths and surface levels; a laboratory analysis of the soil quality, structure and nutrient levels, once complete was able to draw up a plan of action.

“The key was to come up with a highly effective solution while still working to the desired budget,” said Ian.

As soon as the Club agreed to his proposal Ian set about the task.

The entire area was cleared of all herbage before rigorous cultivation; breaking up existing sub soil compaction to a depth of half a metre, loosening of the soil profile allowed preliminary grading of the surface, followed by ameliorating 300 tonnes of medium grade silica sand into the root-zone with granular fertiliser to address the identified nutrient deficiencies – the surface then lightly re-graded level in readiness for seeding.

When it came to the all important grass seed, Ian had no hesitation in using 400kg of Barenbrug’s BAR 7 mix which was sown at 50 grams per metre in three directions.

This is the ultimate mixture for re-seeding or renovating football, rugby, lacrosse, Gaelic football and other sports fields. It brings together five excellent cultivars which include: Barlennium for outstanding winter colour; Romance has excellent tolerance to leaf spot disease, while Bareuro provides high wear tolerance.

“I used BAR 7 because it already had an excellent reputation with top quality cultivars and was very competitively priced, which was important when working to a keen budget,” said Ian.

“Also as we were sowing into a newly reconstructed root zone, there was the opportunity to appraise BAR 7 through to establishment and use for our own future reference.”

The seed was sown in late May 2011 and germinated 2 weeks later. The first mowing was at the end of June. Initially the pitch had been intended for use in the 2011-12 season but this was put on hold due to uncompleted facilities. Therefore it was August 2012 before the first team walked out onto its new pitch.

In the interim Ian undertook regular mowing, to maintain a cut height of 40mm, aeration, scarification, brushing, weed and pest control, whilst implementing a mineral and liquid nutrient and soil probiotic programme, recommended by Mark Atkins from Soil Harmony.

“I am delighted with how the pitch has turned out with a good healthy, high density grass sward and the club have been sensible in only playing first team matches on it to start with” said Ian.

His thoughts are echoed by Club chairman, John Tilley who said. “The pitch has coped extremely well in its first season with good recovery between matches in some testing conditions. We have had some excellent comments on its conditions from visiting teams.

“The speed of the germination and establishment was extremely impressive throughout a dry summer and we already have a root depth of nine inches in some places.

“We are planning to do some more work on the pitch over the summer which will include installing some drainage which will enable us to get more use out of it next season.”

“By combining the all-important initial quantification of the site with a bit of innovation in methods and quality products, this project has presented an excellent example of what can be achieved for local winter sports clubs with limited resources,” concluded Ian Reid.