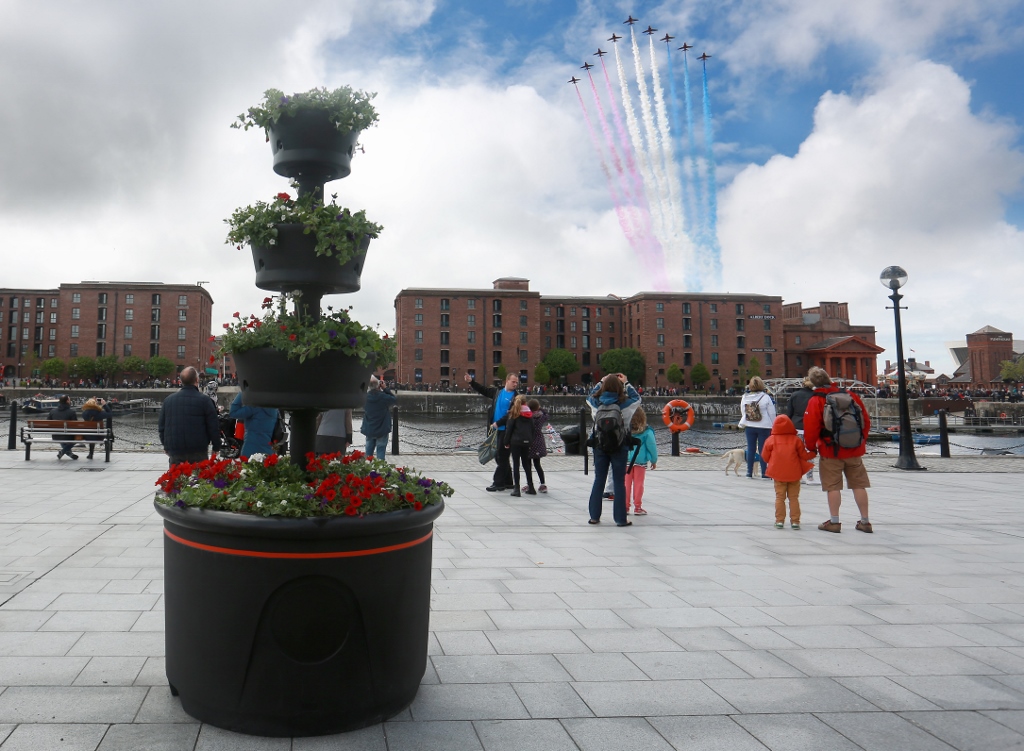 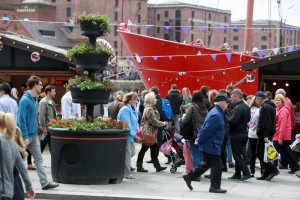 More than one million people were greeted by a display of around 2,400 red, white and blue flowers supplied by a Derbyshire company to help the city of Liverpool make maritime history.

Floral features suppliers Plantscape, based in Ashbourne, sent 20 of its four-tier Eyeful Towers to the north-west in time for a meeting of all three of prestigious cruise ship operators Cunard Line’s “Queen” ships, which took place on the River Mersey on Monday (May 25).

The order, which was placed by Liverpool City Council, was not only of the largest orders received by the company this year, it also required a fast turnaround time, with every individual planters – there are 80 in all – having to be manufactured, planted up and delivered to Liverpool in just two weeks… 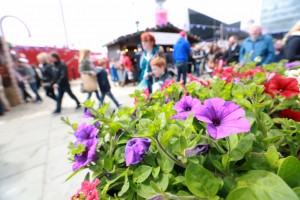 The company had filled the Eyefull Towers with a mixture of surfinia, petunia, zonal geraniums and non-stop begonias and each planter also bore red tape to replicate the colour scheme of the Cunard liners’ distinctive red and black funnels.

They were situated in Liverpool’s Docks and close to the waterfront in time for the meeting of the liners – Queen Mary 2, Queen Elizabeth and Queen Victoria – which was organised to mark the 175th anniversary of Cunard’s first-ever voyage, which saw its ship, Britannia, set sail from Liverpool bound for Halifax and Boston, USA, in 1840.

Crowds flocked to the event from all over the country and also enjoyed a fly past by the Red Arrows.

Mark Stone, managing director of Plantscape, said: “We were extremely honoured to have been asked to provide the Eyeful Towers to decorate Liverpool’s waterfront for the event and worked round the clock to ensure that they were in place ready for the ships’ arrival.

“The Queen liners are the largest Cunard ships ever built and the sight of them all together on the River Mersey was a huge draw.

“We are delighted that our planters helped set the scene and help the city celebrate its maritime history in style.”

The planters will remain in place for a series of events in Liverpool, organised under the title One Magnificent City and including the International Mersey River Festival and On the Waterfront concerts on Pier Head and Albert Dock sites in June. 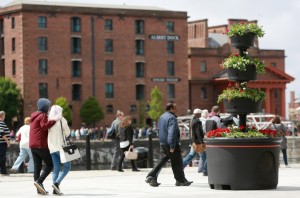 The programme with draw to a close with the departure of the Queen Mary 2, which is Cunard’s flagship and which will recreate Britannia’s original journey on July 4.

Plantscape’s displays have previously been used to decorate streets and public spaces for a number of large events in the past, including the 2012 London Olympics, the Tour de France’s UK legs last year and in 2007 and the Commonwealth Games in Glasgow last year.

South Staffordshire Housing Association (SSHA) has announced that it will be trialling Wienerberger’s e4 brick house™ concept. The Association will...