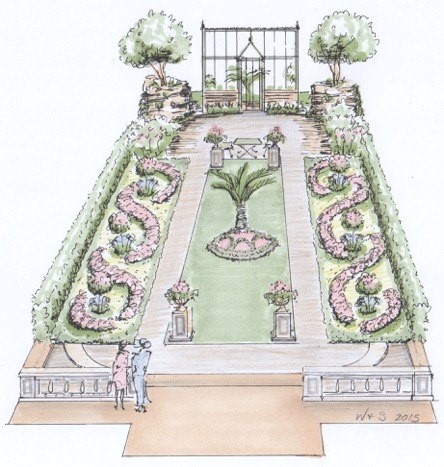 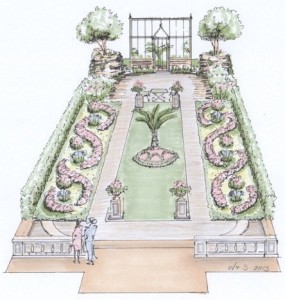 A show garden at this summer’s RHS Hampton Court Palace Flower Show celebrates women’s influence in gardening since the Victorian era in a collaboration between quintessentially English floral fragrance house Yardley London and long-standing charity for horticulturists Perennial, both of which have roots firmly planted in British floral heritage… Designed by Jean Wardrop and Alexandra Stevenson, A Growing Obsession – the Yardley London Perennial Garden is inspired by the Victorian English Garden, recreating the elegance of a ladies’ flower garden.

The concept for the garden was inspired by a book published in 1840 entitled ‘Instructions in Gardening for Ladies’ by Jane Loudon, whose writings helped make gardening more accessible. The British obsession with gardening goes back to this era, a time when it began to cross gender and class divides and more people started to enjoy gardening as a pastime.

The garden evokes an atmosphere of refinement and femininity that mirrors the delicate floral fragrances of Yardley London’s new Contemporary Classics range, which includes English Lavender, English Rose, Lily of the Valley and April Violets. The planting plan includes romantic roses and lavender, which capture the essence of the fragrances.

From the great Victorian gardening tradition came the foundations of Perennial as a benevolent charity. In 1839, the custodians of Britain’s great estates came together to establish pension funds for their sick, injured and elderly gardeners. Perennial was born and today is the UK’s only charity dedicated to helping all people who work in horticulture, and their families, when times get tough.

Quentin Higham, Managing Director at Yardley London says “English flowers make up the DNA of Yardley London and have been used in its fragrance development since the House of Yardley launched English Lavender in 1770.  We are delighted to be sponsoring the show garden, ‘A Growing Obsession’, at the RHS Hampton Court Palace Flower Show to celebrate the launch of our new Contemporary Classics Fragrance Collection.

We have reformulated, repackaged and re-launched our four core floral fragrances – English Lavender, English Rose, Lily of the Valley and April Violets.  The bath and body products also now contain even more natural extracts for added benefits and all products are free from parabens and mineral oils, containing up to 95% naturally derived ingredients.

We look forward to seeing the simplistic beauty of the flowers represented in the Classics Collection brought to life in the garden and for all the visitors to sample the new fragrances at the show.”

Anita Bates, Director of Marketing and Development at Perennial comments: “We are excited to be collaborating in this show garden which helps highlight our heritage as a charity that grew from Britain’s great gardens to look after the people who tended them. The Victorians created some of the greatest gardens in our history, as well as instilling in us the love of gardening we still hold dear in the UK today. For all of those who work looking after our gardens and in all fields of horticulture, Perennial is here if ever they are in times of need now or in the future.”

A Growing Obsession – the Yardley London Perennial Garden reflects the ornate grandeur of the Victorian age, with the formal, geometric shapes of the bedding, pathways for promenading and a terrace with balustrade framing the view. It features a decorative glasshouse, supplied by Griffin Glasshouses for the show, to host exotics, which were imported from around the world and gained great popularity during Victorian times. Another Victorian feature is the fernery, which was highly fashionable in the 19th century, where a variety of mosses and ferns grow up amid a vertical rockery.

Designer Jean Wardrop comments: “The Victorian influences on gardening are fascinating, particularly in relation to women in gardening, and we hope to have captured some of that in our show garden. We have carefully selected plants and materials inspired by 19th century discoveries and practices, so visitors will get a true flavour of the legacy the Victorians left us. We are delighted to be working with Yardley London and Perennial whose heritage and values fit so well with the ethos of the garden.”

For further information about Perennial and to find out more about how it helps horticulturists visit www.perennial.org.uk

For further information about Yardley London and its range of floral fragrances and ancillary body products, visit www.yardleylondon.co.uk