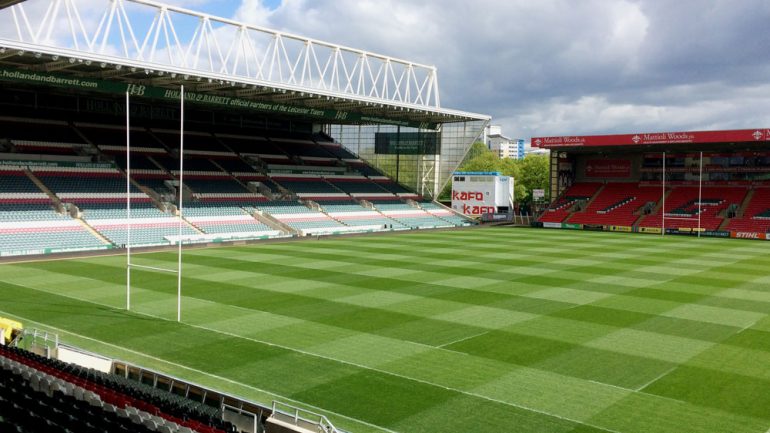 The facilities at Leicester Tigers Rugby Club play host to a packed schedule of training and matches, with the Oval Park training ground alone hosting over 200 games last year. The high usage keeps Head Groundsman Ed Mowe and his maintenance team of three on their toes. Yet, despite this, the pitches are appearing to stay stronger for longer which Ed attributes to Headland Amenity’s input into the club’s nutritional programme.

When Ed took over as Head Groundsman in December 2016, he took a fresh look at the nutritional regime, with the aim of resolving a few key problems as well as improving overall plant health at both the Welford Road stadium pitch and the club’s training ground. “Along with two soil-based pitches, we have one Desso surface at Oval Park, which was struggling to cope with the rigorous demands of winter training. Alex Hawkes, Headland’s Sports Turf Specialist, came in and conducted some tests and following this we structured an overarching feeding programme, along with looking at some specific products to target the problems we faced.”

To strengthen the plant and root development on the desso pitch, Alex recommended the Headland ‘20/20/30’tank-mix. This strategy combines Liquid Turf Hardener, Turfite®and Seamac®ProTurf Feplant elicitors and protectants to maximise health and restrict the onset of disease. “This proactive approach has not only reduced our requirement for reactive fungicide applications, but together with aeration, has given us a noticeable improvement in wear tolerance and coverage. Where previously training would begin in November and the pitch would be virtually destroyed by January, we can now train from August right through to the end of the season” Ed explains.

“We’ve been using C-Complex®during renovations, which helps with microbial activity and root development and Terafirm™soil penetrant which has improved the moisture draw-down on the soil-based surfaces. We’ve also achieved great all-round plant health with Headland’s Seamac®Ultra Plus. For a particularly waterlogged patch we had behind the dead-ball area on the stadium pitch, Alex suggested we try Xpedite®which dramatically improved water infiltration.” Following the success here, Ed additionally appliedXpedite®on some of the line-out and scrummaging areas at the training ground to good effect.

Final word from Ed, “While I hadn’t used Headland products previously, they have proved to be reliable and effective on their own or when used in combination with other products from the range. Alex has been a great help in formulating this programme and we will continue to work with him, fine-tuning the regime, to achieve the quality surfaces we’re looking for.”

Leading landscape supplier Green-tech was called in to assist Newbrook Gardening Services with the planting of two established trees in...