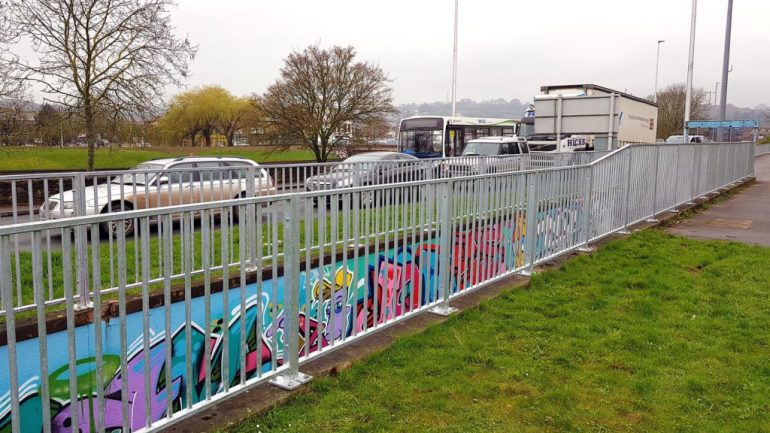 Pedestrian guardrail manufactured by Alpha Rail has been installed at the Exe Bridges roundabout in a bid to help improve pedestrian safety.

Located in Exeter, the Exe Bridges link the north of the city to the south side via A377 and a complex roundabout system.

Funded by Devon County Council, Alpha Rail was contracted by EG Fencing to replace pedestrian railings around the Exe Bridges roundabout and subway system. The existing railings had corroded considerably and it was no longer cost effective to continue to repair and re-paint them.

Alpha Rail conducted a thorough site survey and as a result were able to offer valuable advice on the types of pedestrian guardrail that would need to be installed in order to comply with current legislation.

The site survey outlined that some sections of the metal railings across the two bridges would need to be upgraded to standard P4 pedestrian parapet guardrail and the heights adjusted to suit cyclists or pedestrian users.

The site survey also revealed that some of the metal railings would need to be installed both radiused to fit seamlessly around the busy roundabout system and raked in order to incorporate the transitional sections of the underground subway system.

Commenting on behalf of Devon County Council, Mr. T. Martin said “Alpha Rail offered valuable advice on current legislation, and having been contracted to manufacture this complex pedestrian guardrail system, were professional and a pleasure to deal with throughout the project.”

Phil Ball, Sales Director at Alpha Rail added “The advice we were able to provide on this project was based on our 30 years of installing pedestrian guardrail on highway projects. Because of the scale and intricacy of the landscape, various types of pedestrian guardrail were required in order ensure that pedestrian safety was ensured in a busy area of the city.” 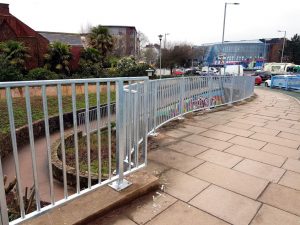 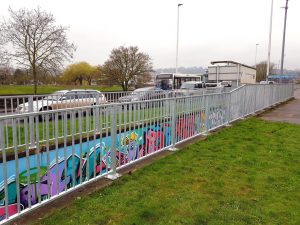 Instant Gardens – Immediate Impact And Use

If you have a project where you or your client are seeking immediate impact for private use or for saleable...