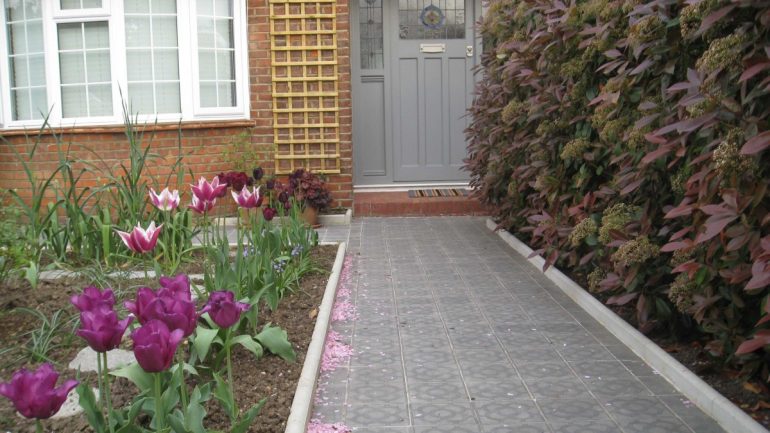 Driven by their love of gardening and a horror at the ecological damage that humankind has inflicted on our environment, Juliet and Neal McDonald decided to demolish the front driveway they inherited when they bought their west London 1930s semi and replace it with a flower garden.

‘Around here most people have paved over their front lawns to gain some parking,’ says Neal. ‘We’re doing the opposite and even though it means we’ll have to pay to leave our car in the street we think it’s worth the small financial hit.’

‘With so many city gardens used for parking it means that birds, bees and butterflies have lost much-needed habitats,’ remarks Juliet. ‘Too much concrete has an adverse impact on humans, too, adding to stress and anxiety whilst a flower garden does the opposite. Now when we open our front door, we’ll experience a calming effect each and every day!’

The couple hired Nova Outdoor Solutions to do the demolition and hard-landscaping and to minimise the dust and noise asked them if they could utilise as much of the old substrate as possible as a base for the new tiles. ‘Luckily the substrate was in good condition,’ says Neal. ‘Otherwise the stability of the tiles we had chosen for a path may have been compromised.’

The plan was to create a large rectangular border that would allow for an impressive display of flowers. The bed would incorporate some of the plants that were previously in a raised bed to the left of the concrete-slab driveway, but would be substantially added to with a display of roses, alliums, poppies and peonies.

Around the border, a combination of plain and patterned Spanish tiles created an attractive pathway to the front door and an area for the rubbish bins. The couple chose a design called ‘World Streets’ – a small-format porcelain collection of tiles by Vives that is available in an anti-slip version so is ideal for high-traffic areas. ‘Porcelain is very durable,’ says Juliet, ‘It has a near-zero absorption rate, so is frost-proof and perfect for the UK climate.’

At the edge of their plot a short section of brick wall was knocked down and replaced with a longer stretch of brick wall to match the existing walls, which all included railings. ‘We had a spare railing, so we were able to match the walls that bordered with our neighbours,’ explains Neal.

To make such a big border accessible, the couple decided to create stepping stones throughout the planting to make weeding easier and a visit to CED Stone in West Drayton offered a wide choice of solutions. Although they had initially been keen on porphyry seen on the company’s website, on looking around the yard, they fell in love with some softly rounded grey Turkish paddlestones and felt that the shapes and sizes offered of this product were more suitable to their project.

The couple did the soft landscaping themselves including the placement of the paddlestones. ‘Without the planting, the paddlestones looked a bit mad,’ says Juliet. ‘And a couple of passerbys made jokes. However, now that the flowers are beginning to flourish, the stones look very natural. We love the result and are enjoying the fact that it is a work in progress.’