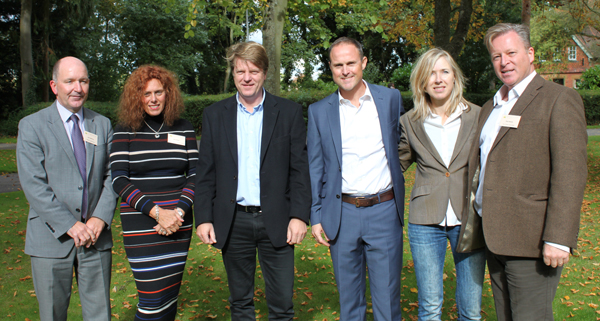 An innovative conference for landscape professionals, ‘Soil – meeting the challenges of a changing landscape’, took place on 14th October at the Howbery Park Conference Centre in Wallingford, Oxfordshire to mark the UN’s International Year of Soils.

The conference was the brainchild of soil scientist Tim O’Hare, who has provided soil science consultancy to some of the country’s highest profile public realm landscape schemes, including the Queen Elizabeth Olympic Park, The Garden Bridge, Jubilee Park, Chavasse Park, Battersea Power Station and King’s Cross Regeneration. His objective for the conference was to provide a platform for debate by the landscape sector on the issues around soil, to give delegates a practical soils tool kit to which they can refer when they next embark on a landscape project, and to ensure soil is elevated to its rightful place in the landscape hierarchy.

First to speak, on the significance of soil in Environmental Impact Assessments, was Senior Associate at Tim O’Hare Associates, Rob Askew. A nationally recognised and industry-accepted standard set of Significance Criteria to help assess the potential impact of infrastructure projects on Greenfield soil resources (topsoil and subsoil) does not currently exist. Rob presented examples of bespoke Significance Criteria for assessing agricultural land and soil resources, which have been used on recent major national Environmental Impact Assessment (EIA) projects, including HS2 Phase 1 (London to Birmingham).

Sue Illman of Illman Young Landscape Design presented on the many aspects of Sustainable Drainage System (SuDS) design, and how soils are a fundamental part of their function. The presentation covered a number of practical aspects, including the need to understand the geology in SuDS design, the soils required for different sorts of SuDS, issues relating to contaminated land, and point source and blanket infiltration.

City silviculture and the dynamics of the urban landscape was the subject addressed by Johanna Gibbons. From John Evelyn to the rapidly evolving field of urban forestry and expanding urban populations, Jo drew from the foundations of the notion of sustainability rooted in forestry practice through to the current call to arms by pressure groups such as Trees and Design Action Group (TDAG) through publications such as ‘No Trees, No Future’. She argued for a cross disciplinary collaborative approach from soil science, community engagement, engineering and ecology in realising the value of the urban forest.

Tim O’Hare’s presentation ‘Practical applications of soil science for today’s landscape’ gave delegates useful, practical information they could take away and apply to their future landscape projects. Drawing on his 23 years’ experience working within the landscape industry he clarified some of the more common soil issues and misunderstandings that arise on projects, including ideas on tree pit design, his opinion on urban tree soil systems, soil requirements for species-rich grasslands, understanding soil pH, and the new 2015 version of BS3882.

With the engaging title ‘The Topsoil Journey – from lovely drop of gear to exact science’, George Longmuir reflected in his presentation on how natural topsoil was bought and sold in the past when greenfield sites were abundant, the ‘muck away’ influence, today’s established topsoil blending operations to produce BS3882 topsoil, and the future of designer soils to meet individual project requirements. The London Olympics was used as a ‘best practice’ case study.

One surprising theme that emerged from all of the presentations was the need to specify soils on a ‘project-specific’ basis and to not rely on the British Standard for Topsoil (BS3882).

Speaking after the conference, Tim O’Hare commented: “I am delighted with how well the conference was received by all the delegates. We have had tremendous feedback on the quality and relevance of the speakers’ presentations and I really do believe we have put soils back at the top of the landscape agenda. If this means that soils form part of the very early planning stages of future projects – as they should – then this conference will have achieved one of its key objectives.”

Congratulations to Matt Tanner, Assistant Manager at Squire’s Garden Centre in Badshot Lea for making it to the final 6...