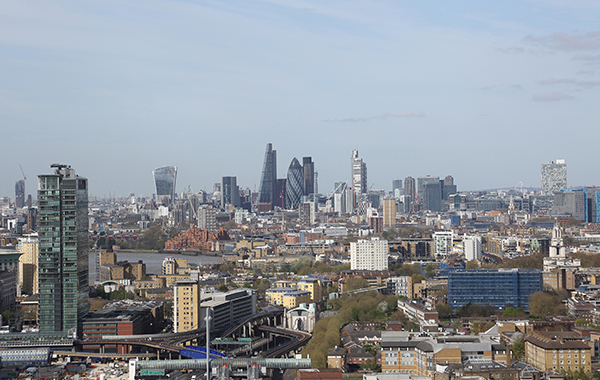 Since the turn of the century, urban living has boomed in Britain, with the population of large city centres in England and Wales having more than doubled between 2001 and 2011. In order to house the influx of people, large numbers of buildings have been built in city centres, reducing the natural land space available to drain rainwater. This increase of buildings has also contributed to the urban heat island effect experienced in major cities across the globe. It is imperative therefore, that building design and construction must accommodate this increase of urban spread. It is more important than ever to be able to build sustainably and the ability to capture and manage rainwater at source is crucial. Here, Ian Crickmore, Technical Director, at Polypipe Terrain explains how the use of blue and green roofs can provide the perfect sustainable urban drainage system (SuDS) for our city centres.

By using water management and source control systems on roofs and podium decks, architects can integrate effective water management at the design stage, whether it is to capture and control the flow of water into drainage systems, or to create a great landscaped carpark, and control the flow of water at a designated rate, into underground drainage systems.

Whilst the majority of rainfall events in the UK produce less than 5mm, limited ground space for rainwater to drain away naturally means that existing drainage systems are overwhelmed, leading to flooding. One way to prevent flooding in our urban areas is to install green or blue roofs at the roof or podium level of tall buildings within city centres.

Green roofs are partial, or completely, covered with vegetation and a growing medium, planted over a waterproofing membrane, incorporating building drainage and irrigation systems. By slowing the rate of rainfall to the drainage system, and storing and attenuating water, green roofs can provide many benefits to our city centres.

As well as preventing urban areas experiencing flooding due to excessive rainfall, green roofs encourage bio diversity in city centres. Green roofs enable the planting of seeds and local vegetation, all of which is sustained through rainwater stored in the green roof. This, in turn, encourages wildlife, mainly birds and insects and therefore increasing the bio diversity in our city centres, whilst also providing a habitat for these visitors.

Recent worries regarding sustainability, climate change and carbon footprints means that alongside the number of tall buildings in city centres, the number of green roofs in the UK is increasing. Urban areas have a higher average temperature than surrounding rural areas due to the urban heat island effect. This effect is caused by the reduction in green space in city centres due to an increase in the number of buildings within a small space. Excessive use of materials such as tarmac and stone, means that buildings in city centres absorb and store heat. Combined with a concentrated energy use, and less natural ventilation than in rural areas, there is a heating effect, a problem that green roofs mitigate, whilst also improving the air quality within city centres.

An alternative to green roofs is the blue roof. With a similar system installed, blue roofs are specifically designed to store and control the flow ofwater, intercepting rainwater at source and reducing peak flow using flow control outlets. Blue roofs can be open water surfaces, storage within a porous media or beneath a surface within a proprietary modular geocelluar system.

Like green roofs, blue roofs temporarily store excessive amounts of rainwater, preventing it from reaching already overwhelmed sewer systems. When the sewer system has the capacity to handle additional rainwater, the blue roof retention materials are designed to release stored rainwater. This can be managed through a flow control outlet, at a rate agreed by the property developer and water companies.

Whilst rain water is often stored at ground level, in city centres where space is at a premium, this is often not an option. Without the expensive excavation of ground, or removal or underground caparking, there is simply no space to store rainwater at ground level in urban areas. Green and blue roofs offer a simple solution to this, as well as providing numerous additional benefits.

Storing water at roof or podium level allows any captured rainwater to be harvested and reused within the building itself. From laundry facilities to car washing and toilet flushing, any rainwater stored via a blue roof can be used, saving potable water. When required, stored water is treated and can be reused for the irrigation of green roofs, amenity/ recreation and biodiversity.

At Polypipe Terrain, we create blue and green roofs using our Permavoid Attenuation system. Permavoid is a geocelluar interlocking system, designed for shallow ground water storage or infiltration and can be used at ground, podium and roof level. With an incredibly high compressive strength and bending resistance, Permavoid can be used to create a horizontal structure ‘raft. The system can be combined in layers, using interlocking shear connectors, and the proprietary jointing system, to increase depth in 85 or 150mm increments. This is particularly useful in designing infiltration systems, allowing flexibility in balancing the soil permeability/ infiltration area of the Permavoid storage units and the level of residual temporary attenuation.

In the case of under car parks, to treat any potential polluted rainwater, a Permafilter SuDS, heavy duty geotextile should be used. Non-woven and needle punched, the filter contains specific oil treatment properties, providing hydrocarbon pollution treatment in SuDS.

With city centre flooding proving to be a growing issue in some key UK regions, we have to look at all the ways we can preserve and protect urban areas from stormwater damage. Excessive flooding can cause damage to buildings, roads and pavements causing road closures, major traffic jams and suspension of public transport in city centres. Alongside providing sustainable urban drainage solutions and the prevention of flooding, storing and attenuating rainwater at podium and roof level provides many ecological, environmental and financial benefits, making it the ideal solution for rainwater attenuation in our city centres. 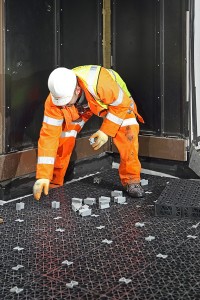 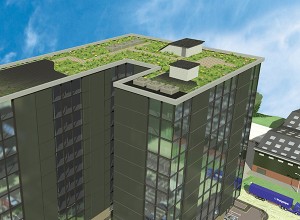 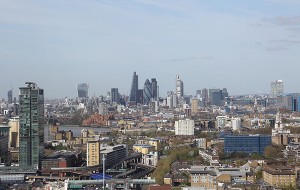