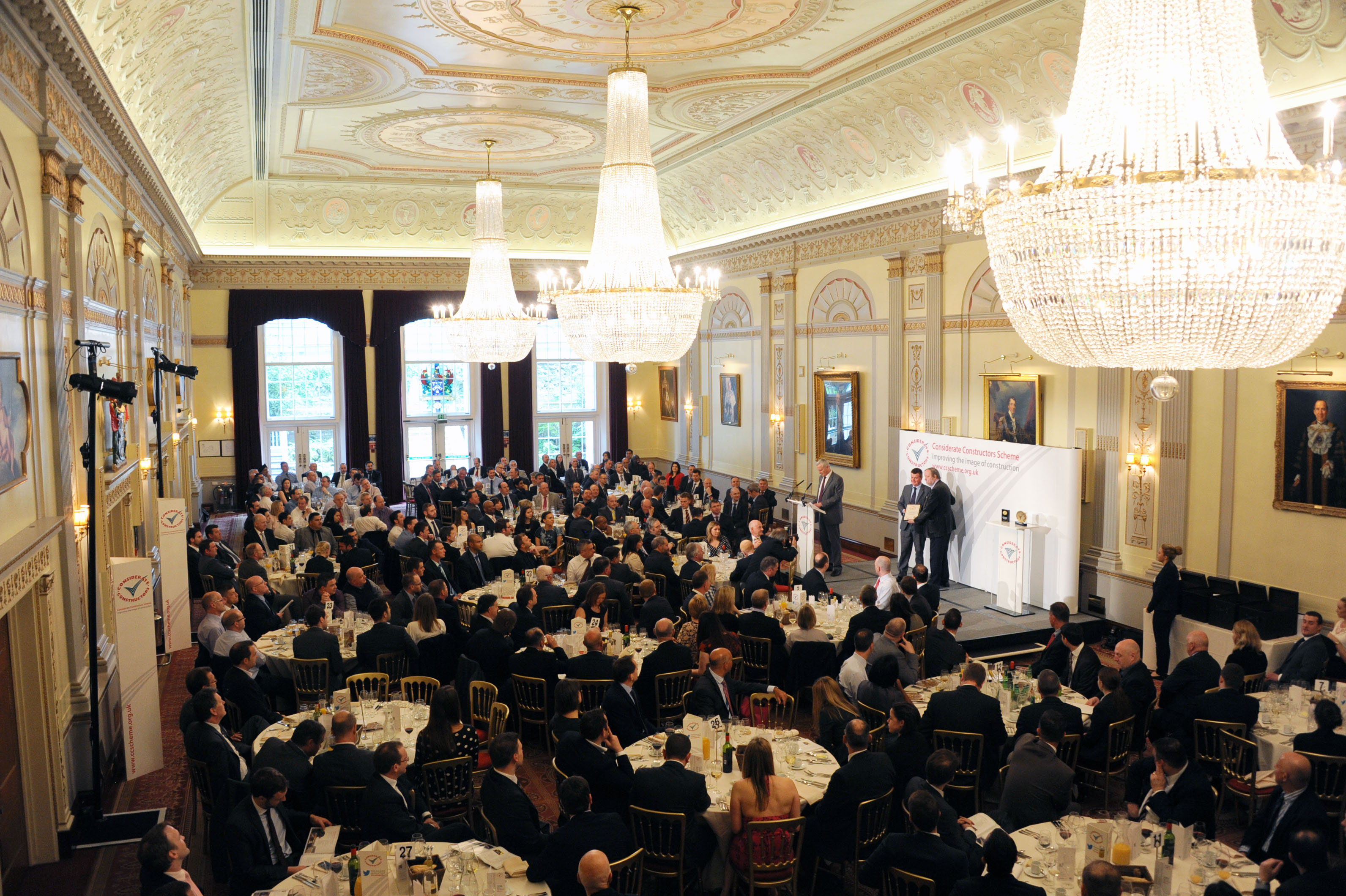 The eagerly anticipated Considerate Constructors Scheme (CCS) 2015 National Site Awards is set to be the biggest and most spectacular awards event to date. The Scheme, which is a not-for-profit organisation aiming to improve the image of the construction industry, will reward registered sites that have raised the bar for considerate construction.

In order to win one of the prestigious awards, the Scheme examines the measures that a registered site has put in place to be more considerate towards local neighbourhoods, the public, the workforce and the environment.

During April and May, an estimated 3,000 guests will attend a dozen award ceremonies being staged in Edinburgh, Manchester and London, where the Scheme will reward the most considerate registered sites that completed in 2014.

From thousands of registered sites, more than 800 have been selected to win Bronze, Silver or Gold Awards. One Gold Award winner will also be given the prestigious title of ‘Most Considerate Site 2015’, with those in the running also receiving Runner-up Awards.

Commenting on the forthcoming awards, Mike Petter, Chairman of the Considerate Constructors Scheme said: “Once again the Scheme is delighted and very excited to be hosting the National Site Awards, with 2015 set to be our biggest to date.

“It is our privilege to reward the efforts of all those involved in projects which set the bar in terms of considerate construction. We never fail to be impressed each year by the high levels of innovation and excellence evidenced throughout the industry.”

The awards which take place over a two month period will see a host of leading industry figures take to the stage to present the awards. These include Nick Baveystock, Director General of the Institution of Civil Engineers; Paul Everall, Chief Executive of the LABC (Local Authority Building Control); Stephen Hodder, Chairman / President Elect of the Royal Institute of British Architects; Diana Montgomery, Chief Executive of the Construction Products Association; Paul Senior, National Chair of the NFB (National Federation of Builders); and William Swan, Director of Constructing Excellence in the North West.

Mike Petter concluded: “Each award-winning project serves as a shining example to the industry as to what can be achieved across a range of different sized projects and in all sectors of the industry. My congratulations to all sites selected for an award in 2015.”

Last year, Carillion Construction’s One St Peter’s Square took home the accolade of Most Considerate Site 2014. Located in the busy city centre of Manchester, the project required the construction of a 13-storey concrete office block with retail on the ground floor, including a deep basement excavation.

The site featured a strong example of employee welfare, interaction with the local community and advanced safety technology for worker protection and outstanding exterior presentation.

For further information about the awards, visit www.ccscheme.org.uk

You have to see it to believe it. New groundbreaking online resource for Landscapers

A fresh, new support resource for landscapers has been launched at www.onlinelandscapedesign.co.uk.   The web service, fuelled and inspired by garden...