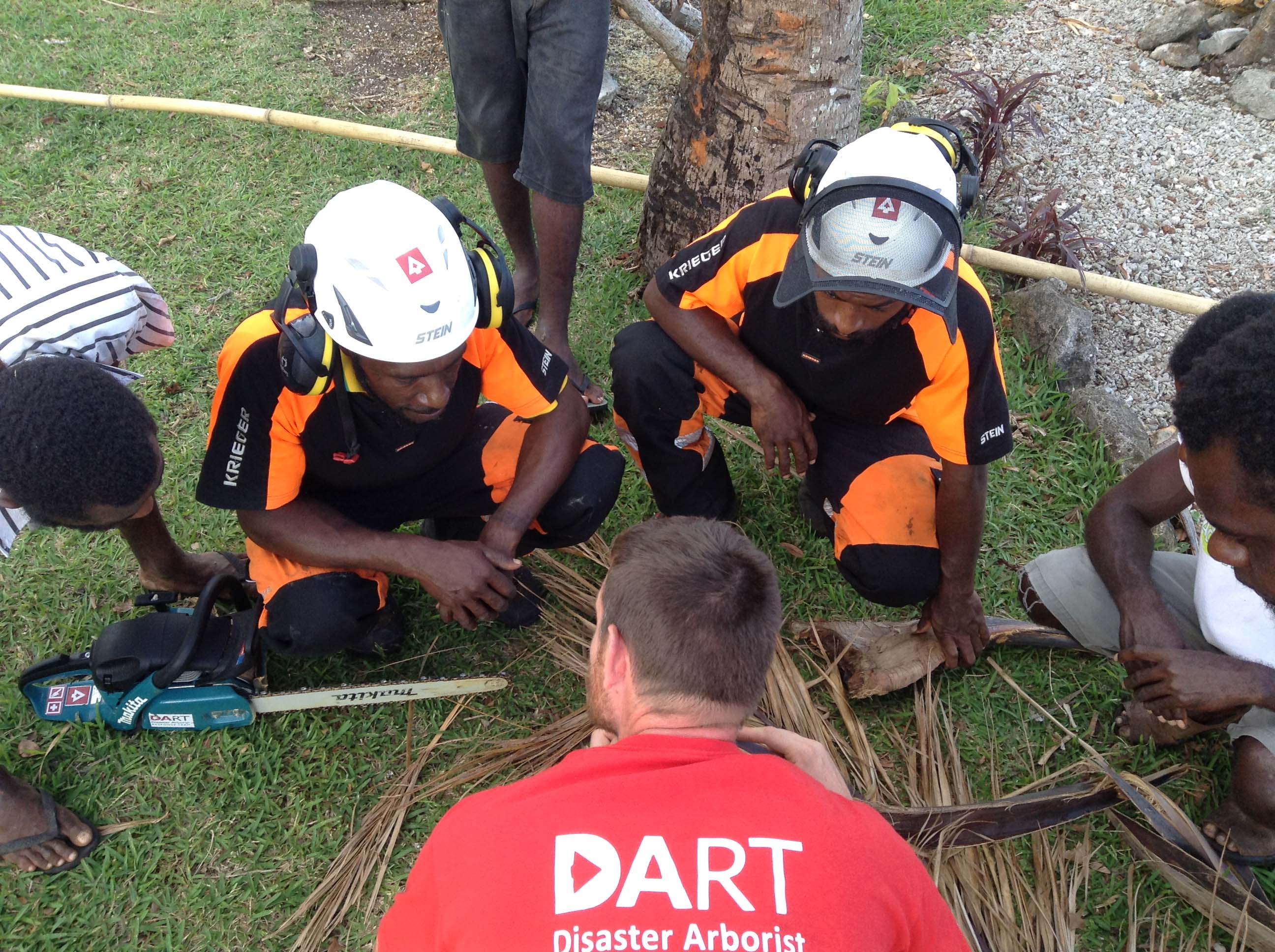 DART CLEAR UP AFTER CYCLONE PAM

Two members of DART – Disaster Arborist Response Team – have safely returned to the UK following their deployment to Vanuatu, the remote archipelago in the South Pacific, following the aftermath of Cyclone Pam over a month ago.

During the recovery period aid agencies have set about clearing significant damage caused by ripping 185mph winds that destroyed 90% of homes, closed schools and medical centres, and flattened essential infrastructure.  Many main routes have been hampered and roads made impassable by fallen trees.   DART works on tree clearance so that aid support can make progress by road, making trees safe in disaster zones across the world.

DART was formed during the aftermath of typhoon Haiyan in the Philippines in 2013, and now kitted with chainsaws donated by Makita in 2014 has played an essential role on the islands where damaged trees have been removed or, preferably, made safe by removal of dangerous limbs, as well as vital clearance of debris across a collection of the smaller islands.  Schools are now beginning to re-open and children are returning to their education, the cost of which accounts for a considerable proportion of family income.

“The guys have been doing a terrific job in helping several of the island’s schools to reopen,” says Gary Bailey, DART International UK. “The priority has been to make the structures safe but there is also an important tree conservation aspect to their work.  Many of the fruit trees they have been working on are hugely important to the schools and the local community as a source of food; without the team’s specialist climbing and arborist skills, many of those damaged trees would undoubtedly have been felled and lost forever, simply to make the areas safe.

“Schools in Vanuatu usually have their own fruit and vegetable gardens and the students work in them regularly helping to save money by growing, cooking and eating food from their own gardens and trees; this provides not only academic knowledge but important life skills.”

Due to challenging customs regimes DART knew they would encounter difficulties in bringing the Makita chainsaws, PPE and other sponsored kit back via Australia.  “The Australian customs are very sensitive to the import of agricultural pests and diseases at their entry point and DART’s equipment and kit was naturally covered with sap and other organic material from their work on the islands,” says Kevin Brannigan, marketing manager, Makita UK, “To avoid kit confiscation drama we accepted DART’s suggestion to donate the equipment to a worthy local project.  It made sense to leave the equipment where it is needed most.  We will ensure that DART’s mobilisation kit is restored with replacement saws.”

The saws were presented to Philip (known as Fifi) who is 21, a father of a one year old, who lives on Nguna Island, which was badly hit by the cyclone, where he makes a living processing timber using his father’s aging chainsaw.  His own house was practically destroyed yet he spent two weeks voluntarily clearing debris from his and four other villages.  Already proficient in using chainsaws he has now been taught a range of different methods and techniques to become a safer operator.  He was proud to receive the Makita 50cc saw, Stein PPE and fuel and Fifi is now intending to work on other islands.

The other recipient, David, a carpenter with three children and partner to a teacher who helped when DART first arrived by putting the team up in her classroom, also benefited from a Makita chainsaw.  Despite the damage to his own home David worked tirelessly to help other villagers rebuild their homes and took time out to assist DART.  His skills, together with the family’s selfless contribution, convinced the DART team that David had truly earned the gift of the Makita saw and Stein PPE as well as full training before they left for their return journey.

“The gratitude, generosity and selflessness of the Vanuatu people is quite humbling,” says Mike Metcalfe, operations manager, DART International UK. “These largely self-sufficient remote island communities have had their lives turned upside down yet they remain resolutely upbeat, genuinely interested in our very different lives and always ready to share what little they have with a smile.  Thanks to the generosity of our many supporters we feel we have left a real legacy by donating the valuable equipment to Fifi and David as there is no shortage of essential work still to be done in Vanuatu.” 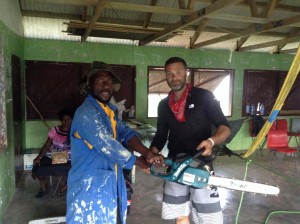 Like many successful contractors over the past 20 years, Ian White started off as a one-man band offering drainage and...