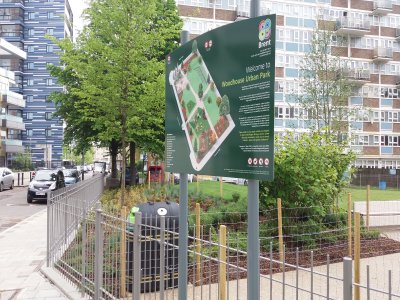 Woodhouse Park is a key attraction of the regeneration project in South Kilburn. Valued at £475k the new park has a variety of robust playground equipment for users to enjoy, attractive site furniture as well as many trees and plant species.

The metal railings were installed around the perimeter of the playground equipment area to create an effective boundary. Three single leaf self closing gates and one double leaf gate were also supplied and all metalwork was supplied galvanised and powder coated to protect it from the elements as well as general wear and tear for many years.

The park is located on Albert Road in the London Borough of Brent and offers local and wider communities a park environment that they can enjoy away from the hustle and bustle of life in Central London.

Phil Ball, Sales Director commented “It was a great to be involved in a project that is committed to bring green park spaces back to life within urban areas. Residents of the London Borough of Brent and the local community now have park that will help bring a sense of excitement and involvement back to the area.”

The on-going maintenance of the park is just as pioneering. The new park will be one of a new generation of parks to fund its operation using an emerging ownership model that is growing in popularity involving “Friends of” community groups.

Alpha Rail understands that The South Kilburn Park Trust is now working collaborately with local organisations, businesses and community groups to formalise and facilitate a ‘Friends of Woodhouse Urban Park’ who will take ownership of the new park and be responsible for it’s future usage and development.

Woodhouse Park is just one of a great many parks and gardens that have benefited from the addition of decorative metal railings and gates. Other Alpha Rail projects have included Forest Recreation Ground in Nottingham, Jubilee Gardens and Westminster Gardens in London as well as Beacon Park in Lichfield ad Middleton Park in Leeds to name but a few.  Back in 2002, Alpha Rail supplied over 700km of metal railings for Battersea Park when it received an £11m makeover. Many of these railings still look as good as new today due to the quality of manufacturing and on-going care and maintenance. 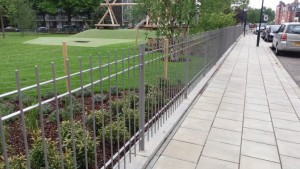 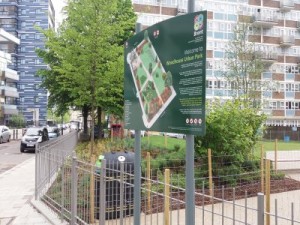