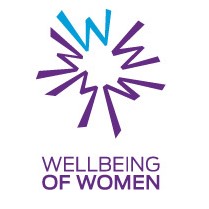 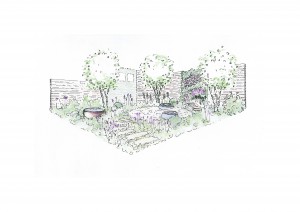 The Wellbeing of Women Charity is delighted to announce that its ‘Summer Garden’ at RHS Hampton Court Palace Flower Show will be designed by Claire Moreno, Amy Robertson and Wendy Von Buren.

Wellbeing of Women is a unique health charity which has touched the lives of millions of women over the last 50 years, funding vital medical research and training. The charity has pioneered major advances in healthcare and has significantly improved the health of women and their families.

At the centre of the garden there will be a raised small circular terrace, signifying the circle of life and a curved stepping stone path will lead to the terrace, signifying a journey. Each of the five stepping stones will be engraved with a decade, from the 60s to the present day, marking the significant research journey funded by Wellbeing of Women over the last 50 years.

The garden will also feature two boundary walls. The first, includes a section of hedge, which will incorporate three panels of flowers cast in concrete, acting as a memorial to those lives of women and babies that have been lost. In sharp contrast, the second boundary wall will be a living wall, to promote the charity’s success in saving the lives of millions of women and babies.

Fiona Leishman, Chief Executive, Wellbeing of Women, said: “Due to the therapeutic link between gardens and wellbeing, we are thrilled that Claire, Amy and Wendy will be designing an RHS Hampton Court Flower Show garden. It is the perfect opportunity to raise awareness of our work.”

Amy, Claire and Wendy said: “We are so excited about our first design for the Show and this work combines all of our shared passions. Wellbeing of Women are a fantastic charity who over the last 50 years have funded much needed medical research in to a wide range of issues affecting women’s health. We all feel a personal affinity to the work of the charity and hope that our RHS show garden will help to raise the profile of the charity and awareness of its vital research.”

“We are very grateful for the huge collaboration, donations and effort that has come from multiple organisations, in order for the garden to become a reality.

Amy, Claire and Wendy met while studying at the Garden Design School at Painshill Park in 2012, under the tutorage of award-winning designers Robin Templar-Williams and Moira Farnham.  After qualifying, they kept in touch creating a monthly forum to discuss current garden design issues and provide each other with a support network.  They discovered a shared passion to create an RHS show garden with a purpose. While attending a charity function, Wendy was introduced to Wellbeing of Women.  The designers discussed the charity and the breakthrough research it creates and found that all of them had personal experiences that connected them to the work of the charity.

ABOUT WELLBEING OF WOMEN

Wellbeing of Women is a unique health charity which has touched the lives of millions of women with its long history of funding ground-breaking medical research into women’s health concerns – over the last 50 years the charity has significantly improved the health of women and their families. Areas of research include pregnancy and birth (including IVF, miscarriage and preterm birth), gynaecological cancers and quality of life issues, such as menopause, which affect the daily lives of women all across the UK.

Previously known as Birthright, Wellbeing of Women was founded in 1964 and has since pioneered the research which has resulted in many of the healthcare interventions for women which we all take for granted today – from increasing survival rates in premature babies and the introduction of foetal scanning in pregnancy to the importance of folic acid, both when planning to conceive and during pregnancy, Wellbeing has also funded research which identified the link between cervical cancer and the human papilloma virus, against which teenage girls are now routinely offered immunisation.