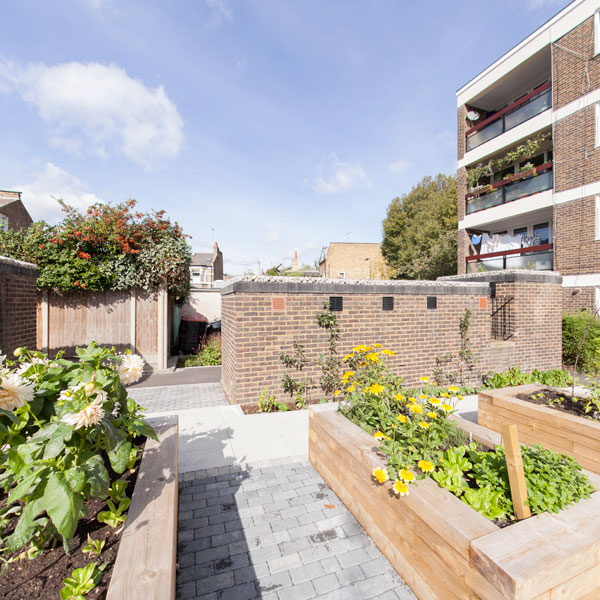 These measures – which include green roofs, green walls and ground-level Sustainable Urban Drainage Systems (SuDS) – can now be explored in a new 360° virtual tour, developed by Groundwork London to showcase the important role that urban housing estates can play in enabling our cities to cope better with the effects of climate change. View the tour on Groundwork’s website.

Climate scientists predict that climate change is likely to mean more winter flooding and summer heat waves in the UK.  All cities, including London, need to be prepared and adapt in order to minimise the impact that extreme weather events will have on both the environment and on people’s lives.

Since completion on the first two sites in 2015, surface run-off from 3,000m2 of impermeable surface has been diverted away from the sewer system into green infrastructure, and a further 1,200m2 is planned across the remaining estate. In recognition of the project’s innovation, Groundwork won a SWIG Award (Sustainable Water Industry Group) in the ‘Urban Greening’ category in 2015.

Along with increasing the functional green infrastructure in the borough, and reducing the local flood risk, one of the main aims of the project is to demonstrate the case for cross-cutting investment in SuDS for climate change adaptation, with a view to these interventions being increasingly replicated on social housing estates in the future.

The three estates on which the measures have been installed were specifically chosen in order to demonstrate how such green infrastructure adaptation can be implemented across a wide range of urban housing settings. The project also sets out to demonstrate the value of retrofitting older housing stock can be a cost-effective solution to flooding and other urban climate threats.

Queen Caroline Estate, near Hammersmith Bridge, is a large, open estate with multi-storey residential low-rises which are separated by large unused areas of standard grass and paving. This space offered scope for large scale ground-level features to manage water run-off from the adjacent building roofs and paved areas, and to bring these uninspiring spaces back into active use.

By contrast, the residential buildings at Cheesemans Terrace are set close together, with a hard landscape dominated by roads and car parks. With limited soft landscape, the design called for the use of interventions which incorporated the buildings, such as downpipe-fed raised planters.

The project also features a number of SuDS interventions rarely before seen in the UK, including stormwater tree pits; schotterasen, an Austrian ‘gravel lawn’; and vertical rain gardens.

One of the innovative aspects of the Climate Proofing Housing Landscapes project is the community engagement work undertaken by Groundwork London. Training and employment opportunities have been created for apprentices – Groundwork’s ‘Green Team’ horticulture trainees – to carry out some of the adaptation work, and Groundwork have delivered training to housing professionals and grounds maintenance contractors to learn how to implement and maintain these measures and to replicate them elsewhere.

Groundwork has been working alongside local residents, providing opportunities for them to shape the open space improvements on their estates, and promoting awareness about the implications of climate change for London and Londoners, as well as the actions that residents can take themselves to contribute to adaptation.

In addition to the technical successes, the project has received a fantastic response from residents, who appreciate both the increased resilience provided by the measures, and the improved access, informal play, food growing facilities and enhanced colour and interest throughout the estates.

To date, the project has completed two of the three estate improvements, with the third to complete by spring 2016. Groundwork’s Green Team trainees are currently maintaining and managing the landscape improvements, with food growing clubs and community activities taking place to support continued engagement with residents. Groundwork London is also developing a LIFE+ film, project implementation guide and training programme for the project, which will be released later in 2016.

The Climate Proofing Housing Landscapes project is co-financed through the European Commission’s LIFE+ Programme, which has supported over 4000 environmental, nature conservation and climate action projects across the EU since 1992.