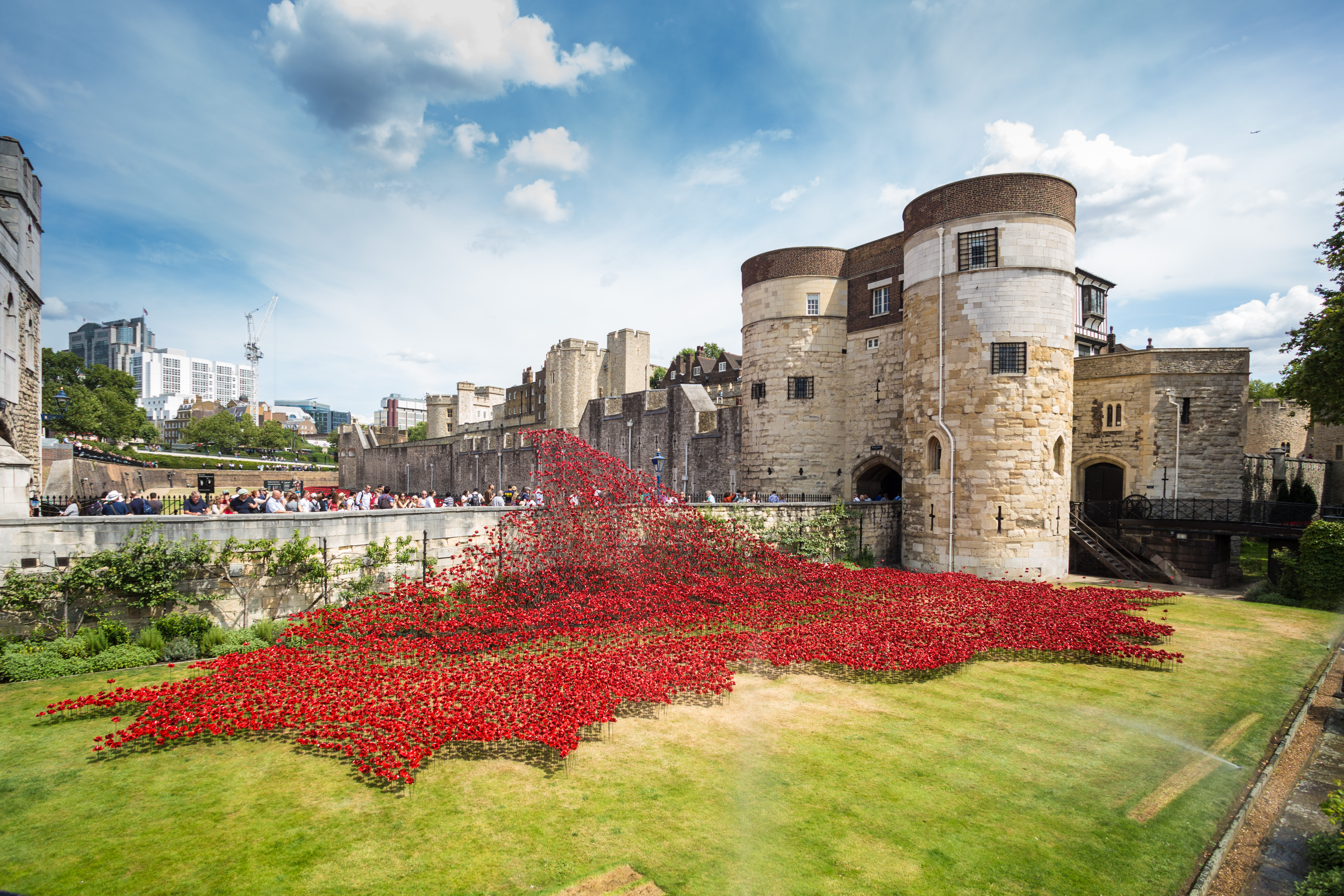 Independent charity Historic Royal Palaces is pleased to confirm that two major features of ‘Blood Swept Lands and Seas of Red’, the art installation of poppies at the Tower of London, by the artists Paul Cummins and Tom Piper, will travel to a number of locations around the UK from 2015.

Donations from the Backstage Trust and the Clore Duffield Foundation, together with government funding, have secured Weeping Window and Wave, two large-scale metalwork structures featuring thousands of ceramic poppies, allowing them to be presented across the UK from 2015 – 2018. Following a national tour, the artworks will be gifted to the nation and go on permanent display at the IWM London and IWM Manchester as one of the 14 – 18 NOW legacy projects.

Weeping Window and Wave form two striking features of the display at the Tower of London. Weeping Window is the cascade of poppies that can be seen pouring out of a window 20ft from the ground and into the moat. Wave is a curling swathe of poppies which rises up from the moat to create an arch over the entrance to the Tower. Wave will remain in place at the Tower of London until the end of November, before travelling to sites around the UK until 2018.

It is estimated that the art installation at the Tower of London will have been seen by more than 4 million people by the time it is completed. In total, 888,246 ceramic poppies will be planted in the moat, one for each British and Colonial fatality during the First World War. A team of over 19,000 volunteers from across the UK have helped to install the poppies so far, with the last one being planted on Armistice Day, 11 November 2014. The first poppy was planted on 17 July 2014 by one of the Tower of London’s Yeoman Warders.

All of the individual ceramic poppies have now been sold, and will be dispersed to hundreds of thousands of people across the UK and beyond after 11 November. The sale of the poppies will result in millions of pounds in additional funding for six service charities: Confederation of Service Charities (COBSEO), Combat Stress, Coming Home, Help for Heroes, Royal British Legion and SSAFA (formerly the Soldiers, Sailors, Airmen and Families Association).

General the Lord Dannatt, Constable of the Tower of London, said:
“We are delighted that key elements of Blood Swept Lands and Seas of Red – the poppies installation at the Tower of London – which has so captured the heart of the nation, are to be preserved for many more thousands of people to see and appreciate over the coming four years.

“All at the Tower of London and Historic Royal Palaces are most grateful that this wonderful community art project will continue for the next four years.”

Michael Day, Chief Executive of Historic Royal Palaces, commented:
“The poppies installation at the Tower of London has captured the public imagination. We have been overwhelmed by the support and generosity of everyone involved, from the many volunteers that have helped plant the poppies over recent months, to the hundreds of thousands of people who have bought the poppies and will give them permanent homes across the UK and beyond.

“It has always been our intention that the poppies installation would have a legacy beyond 11 November, so we are delighted that a part of this unique commemoration can be shared by the nation. We are grateful to the donors and to the Government for making this possible.”