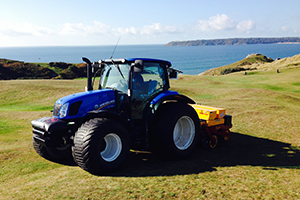 Perched 200 feet up on the cliffs of the south Wales coast, overlooking some of the UK’s most beautiful shoreline, Pennard Golf Club describes itself perfectly as the “links in the sky”.The sport has been enjoyed at Pennard, on the Gower peninsula, since 1896. Over the years it has become such a gem that American golf writer James W. Finegan was moved to describe its surface as worth crossing an ocean to play on.

It’s a big responsibility for Head Greenkeeper Dean Thomas, for whom finding the right machinery is a key ingredient to keeping the grass in perfect condition for its members – and the occasional American from across the Atlantic.

One of the most important tasks at the end of the summer season is replenishing the fairways’ grass with a seed drill in October; a job for which speed is the essence to minimise disruption to players but without risking damage to the carefully manicured surface.

The solution came from J.G. Plant, a New Holland dealership based in Bridgend, Glamorgan, which provided Dean with a T6.140 tractor – the perfect utility workhorse balancing power with sure-footedness.

Fitted with extra wide Trelleborg tyres for minimal ground pressure, the T6.140 had the power to pull the heavy seeder and drill the fairways with 80 bags of seed – all in just one pass. The task was done in a week.

Dean explained: “It was a challenge because our fairways are some of the most undulating in Wales. Basically we needed something that could take the fairway seeder which is twice the weight of the greens seeder. We needed a big tractor.

“The T6.140 was brilliant. It was so simple to use one of my kids could have driven it – it was that easy. It followed the inclines very well and it never felt dodgy; it was very stable and it did not struggle at all.

“The tyres were chosen by J.G. Plant and they were so big – perfect for spreading the load. It’s a beast of a tractor but it hardly made a mark on the fairways.”

With its strong four-cylinder engine, the T6.140 joins a range whose power-to-weight ratio is as low as 28.6kg/hp (CV) – essential for reducing soil compaction and with the added benefit of fuel-sipping efficiency too.

The T6.140 also boasts Engine Power Management to make life even easier. Essentially, the engine develops more power and torque according to the actual load on the transmission, hydraulics and PTO. It optimises performance and improves fuel consumption even more.

Dean added: “The cab had brilliant visibility and even coped with a direct hit from a golf ball. It was comfortable too – I was on it for a week and it was fab to have no aches afterwards.

“To anyone else considering the T6 I would definitely go for this tractor just for its suitability, the fact that it did a good job and because there was not a lot of disruption for members.”

Gareth Rees, Managing Director at JG Plant, said: “I’m really pleased the T6.140 did the business for Dean. It’s a great tractor which proves time and time again how versatile and dependable it is – whatever the job.”