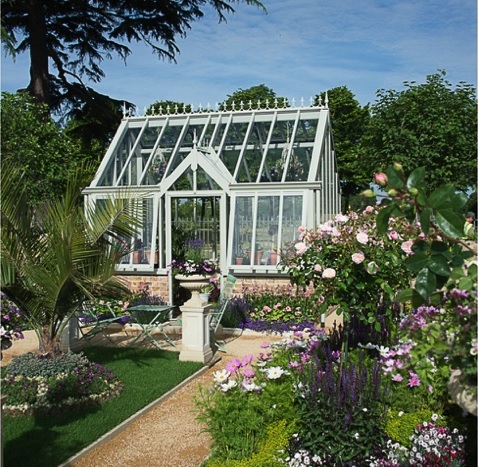 ‘A Growing Obsession – the Yardley London Perennial Garden’ has been awarded a Silver Medal at the RHS Hampton Court Palace Flower Show, as well as receiving a special visit from royalty. Designed by Alexandra Stevenson and Jean Wardrop in collaboration with Yardley London and Perennial, the Victorian inspired show garden celebrates women’s influence in gardening since the 19th century. HRH Princess Alexandra made a special visit to the garden today in her role as patron of Perennial, the charity for horticulturists.

Based on a Victorian ladies’ flower garden, the garden drew fantastic compliments from the many visitors and celebrities that stopped to admire it during press day. Guests that visited the garden included Linda Barker, Nicki Chapman, Jo Brand, Charlotte Hawkins and Camilla Kerslake.

An array of influential women from the world of horticulture gathered on the garden to celebrate the women and gardening theme, including garden designers Anne-Marie Powell, Jo Thompson and Pat Fox and nurserywomen Rosy Hardy. This is the first time designing a show garden for one half of the design duo Alexandra Stevenson, while Jean Wardrop has been involved with Hampton Court Palace Flower Show just once before.

Quentin Higham, Managing Director at Yardley London says: ““We would like to thank everyone involved in creating such a spectacular garden. Jean and Alexandra truly captured the essence of the Yardley London Contemporary Classics Fragrance Collection, and we are so pleased they picked up a very well deserved silver medal.”

Anita Bates, Director of Marketing and Development at Perennial comments: “Bringing together such a fabulous show garden is a huge team effort and we would like to thank everyone involved. Jean and Alexandra should be rightly proud of this medal for which they have worked so hard and we are sure that visitors to the show will enjoy it. We are delighted that our royal patron, HRH Princess Alexandra was able to make the time to come and see the garden, as well as personally thanking all of the volunteers who help Perennial run the plant crèche at the show, which raises funds so that we can help more horticulturists in need.”

The concept for ‘A Growing Obsession’ was inspired by the writings of Jane Loudon, whose book ‘Instructions in Gardening for Ladies’ published in 1840 helped make gardening more accessible to women. The British obsession with gardening goes back to this era, marking the transformation of gardening from being male-dominated activity, to something that everyone could enjoy. This was the same point in history that Perennial was founded as a benevolent fund to look after the gardeners of Britain’s great estates and today Perennial is the only UK charity dedicated to helping all people in horticulture and their families when times get tough.

The garden is elegant and feminine, including romantic roses and lavender, which mirror the delicate floral fragrances and soft colour scheme of Yardley London’s new Contemporary Classics range that includes English Lavender, English Rose, Lily of the Valley and April Violets. Reflecting the ornate grandeur of the Victorian age, the garden is formal in style with York stone pathways for promenading and a balustrade provided by Chilstone framing the view. It features a decorative glasshouse supplied by Griffin Glasshouses for exotics and ferneries set amid Pulhamite rockeries, both fashions of the 19th century.

The garden will be featured on the BBC TV coverage of the show on Thursday 2nd July at 9.30pm on BBC TWO.

Vote for ‘A Growing Obsession’ in the People’s Choice Awards at: www.rhs.org.uk/shows-events/rhs-hampton-court-palace-flower-show/exhibitors/2015/gardens/a-growing-obsession

For further information about Perennial and the garden visit http://perennial.org.uk/garden/a-growing-obsession/ Perennial also has a trade stand at the show selling its excellent range of gifts and gardening products, where the sun hats are selling particularly quickly in the heat.

For further information about Yardley London and its range of floral fragrances and ancillary body products, visit www.yardleylondon.co.uk