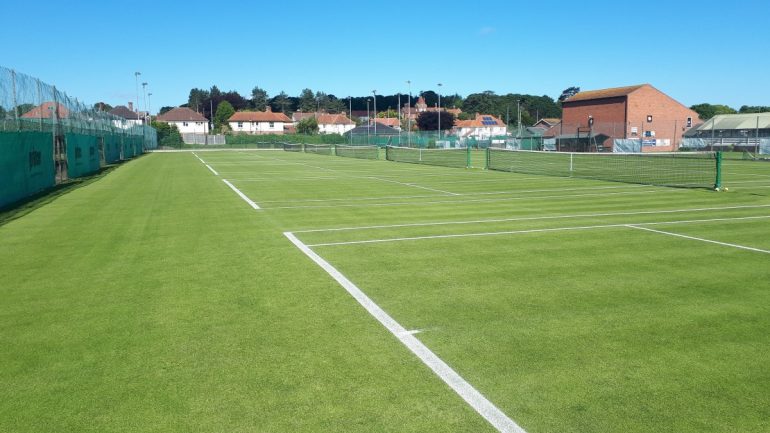 One measure of the calibre of any sporting venue is not only the level of use of the site but also the number of favourable comments made about the quality of the playing surfaces.

Cromer Lawn Tennis & Squash Club (LTA) can lay claim to both – thanks to the expert court maintenance regimes instigated by head groundsman Matt Jordan and his use of a range of Rigby Taylor amenity products. These, he says, “prove indispensable in enabling us to keep our grass courts playing well and looking good all through a busy season”.

Based on the Norfolk coast, Cromer LTA is open for play on weekdays during the summer months from 9am to 10pm, and on weekends from 9am to 8pm during the summer and 9am ‘til 4pm in the winter. The facilities are heavily used throughout the year. The 10 grass courts are open from April through to September, when play switches to the two floodlit artificial courts and the pair of hard courts.

The summer schedule includes a number of major tournaments when the grass courts especially are at full stretch:

A Junior Week when 300 youngsters descend on the site and utilise all courts;

The Open Senior Week, with around 200 competitors on grass – which this year celebrates its 100th anniversary at the long-established (1907) club; and

The County Week, when the club welcomes a host of players from around the country on its grass courts.

For such tournaments, it is not unusual for Matt and his assistant Peter Cooper to be at the site every day from 5.30am to, for example, cut the courts (at 8 mm high) “though the daily use of the mowers is more for ‘hoovering up’ any debris on the courts as it is for keeping the grass height consistent”. They also attend at night, when necessary, to water the courts.

But they utilise a well-practised pitch care regime that, says Matt, begins when the tennis season ends in September as court renovations begin.

“We will start with a concerted programme of heavy scarification when most of the sward will actually be removed,” he says. “Then we spike and apply a light covering of Kettering loam before applying Rigby Taylor’s R9 ultra fine dwarf rye seed. We’ll keep off the surfaces for two/three weeks before we start cutting – to 14 mm high – and we’ll continue to cut to this height every other week throughout the winter.

“During this time we will apply various Rigby Taylor products and we’ll spike and slit once a month in preparation for the new season, which starts in April. That said, I avoid aerating and spiking after perhaps February/March, depending on the weather, to avoid encouraging cracking on the courts.

“I’ve worked with bents and fescues in the past,” says Matt who spent eight years as a golf greenkeeper (when he gained his Level 3 accreditation) before joining Cromer LTA in 2008. “But rye is, of course, the choice for tennis courts and I find R9 (treated with Germin-8T) provides excellent wear and disease tolerance, for example.

The ‘T’ in Germin 8T identifies the content of the Trichoderma atroviride filamentous soil fungi that forms a mutual endophytic, beneficial relationship with grass plants. The symbiotic relationship delivers increased tolerance to the turf diseases leaf spot, pythium and rhizoctonia.

Pre-applied to each individual grass seed, Germin-8T contains a speciality surfactant that is activated when the seed comes into contact with rootzone moisture. This provides effective penetration of water through the seeds’ outer layer (pericorp) into the endosperm, by lowering the surface tension of the surrounding water molecules. Roots can also take advantage of the micronised mycorryhizal fungi that will deliver long-term plant benefits.

The result is that at the active germination stage, each emerging seedling has immediate access to a highly beneficial package of targeted nutrients, biostimulants and micronised mycorrhizal fungi that together aid early establishment, improved root mass development and accelerated leaf extension.

“I do trial competitor grasses against R9 but haven’t found anything to match it – for example, its germination rates are consistently 25% better than anything I’ve tried.”

Likewise, he pinpoints a number of other Rigby Taylor’s products as being ideal for his needs – and those of the courts – “including Premier HG slow-release granular and Fine Turf 6-0-18 fertilisers, SeaQuest liquid seaweed and Magnet Velocite liquid iron”, in combination with the company’s iGo line marker and its Impact XP paint “where every application consistently lasts for a week”.

The artificial courts are brushed as often as possible when the weather is dry, “and at least every other week”, while the hard courts are sprayed once/twice a year to keep the moss at bay.

Price Turfcare, the UK and Ireland distributor of the Ventrac multi-implement compact tractor and Ryan turf maintenance equipment, is returning...