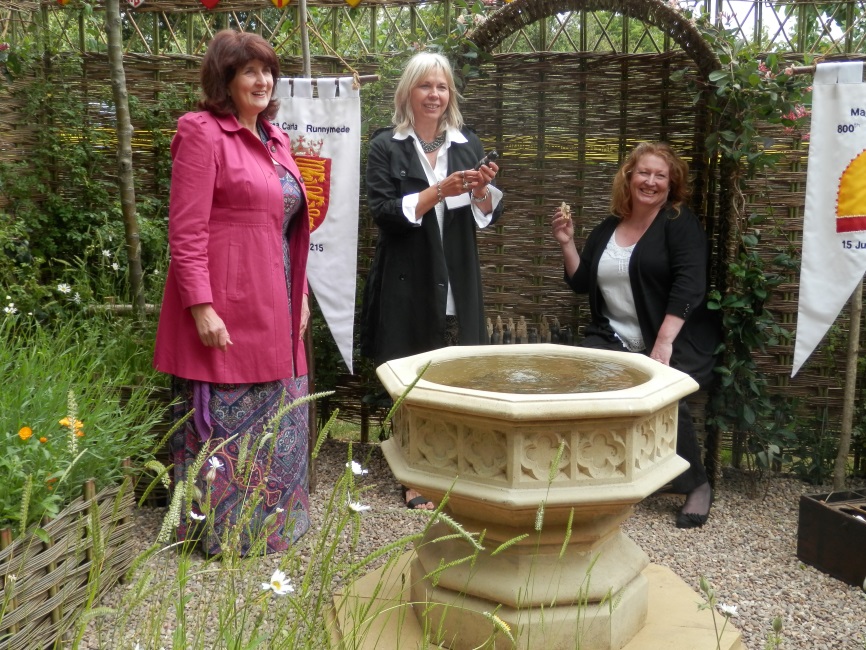 The medal winning, Runnymede Surrey Magna Carta 800th anniversary garden, which starred at the Chelsea Flower Show 2015, has relocated to the grounds of the Runnymede-on–Thames hotel and spa, located adjacent to the meadows where the great charter was sealed in 1215.

The small artisan garden, which features Haddonstone’s Gothic Fountain and Upper Base, was officially opened this morning (6 June) by gardening celebrity Charlie Dimmock alongside designers Patricia Thirion and Janet Honour. The formal layout is evocative of the gardens of the medieval period.

A wattle arbour over a turf bench provides support for climbing plants. The garden’s symmetry symbolises the new law and order of the time. A slice of a yew tree trunk, inscribed to relate to Magna Carta, is featured towards the front of the garden in a meadow-planted bed, evocative of Runnymede.  This is symbolic of the ancient Ankerwycke Yew, said to be about 2000 years old, and growing close to the site where Magna Carta was sealed.

Haddonstone’s Gothic Fountain creates the focal point within the garden. The fountain’s design comprises a self-circulating Gothic octagonal fountain with quatrefoil decorations, positioned upon a Haddonstone Upper Base. Other designs in the Haddonstone collection range from planters, statues and fountains to balustrades, follies and fireplaces.