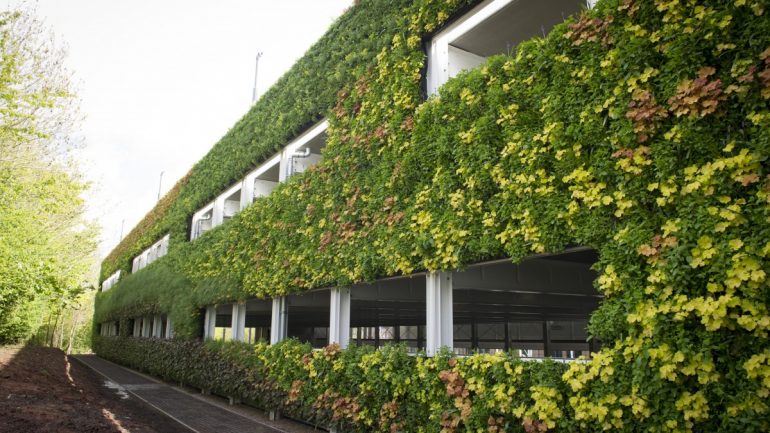 Living Walls: Reviving The Urban Jungle One Car Park At A Time

By 2050 the United Nations estimate that 68% of the world’s population will live in urban areas, but with construction on the increase to accommodate overcrowded cities, green areas are rapidly being exploited for much-needed space. This is also having a detrimental effect on our general health and well-being, with 91% of the world’s population already residing in areas where air quality exceeds WHO guideline limits[i].

With space now at a premium, the environmental impact of development is emerging as one of the biggest challenges being faced by the industry, as demand increases for healthier, greener urban spaces. Creating new challenges for local authorities, contractors, planners and developers, Steve McIntyre, Urban Environmental Consultant, ANS Global, outlines why even the humble car park has plant potential.

Creating a positive difference in inner city environments, living walls have become a prominent feature for ethical design and are crucial for staying on top of ecological requirements. Installed onto wasted space, living walls can transform even the most unlikely structure into a thriving oasis that offers a wealth of benefits; from improving general health and well-being, to supporting biodiversity.

For instance, and despite being a modern necessity, the multi-storey car park is generally a concrete urban eyesore. Towering industrial boxes that encourage high levels of toxic pollution, car parks are often a source of contention for local communities and local authorities alike. However, the addition of a living wall can transform the man-made structure into a thriving urban garden, with benefits that far exceed the aesthetic.

A biophilic solution to today’s environmental challenges, living walls can filter out up to 95% of the pollutants generated by vehicles[ii], while also providing an opportunity to reinvent wasted space as living, breathing installations and a glowing symbol of sustainability.

From purifying toxic air and restoring a loss of nature, to benefiting mental health and creating a thriving habitat for valued wildlife, living installations have a central role to play in urban regeneration and the proof is in every finished project.

There are also no limits to a living wall, with a notable ANS Global project seeing the installation of Europe’s largest external living wall at National Grid’s HQ car park; which incorporates 97,000 plants and 20 different species, including fruit bearing plants. With planning demanding that the design focus on more than just the green aesthetics, every single plant was required to have a green, sustainable purpose while also delivering proven ecological values, such as air purification and biodiversity.

The company’s commitment to sustainability is now visible for all to see, and with planning requiring a camouflaged construction all year-round, the design is focused on providing an evergreen living wall façade; one which grows, changes and blooms with each season. The project also earned national attention, winning the Best New Car Park Award.

Green infrastructure, such as living walls, has the power to reintroduce nature to urban areas, transforming what would be a metal box into a powerful, visual statement. However, ensuring the right plant palette is selected is vital in ensuring that a living wall will thrive in the long term; this includes considering the local climate, elevation and surrounding environment.

With space only set to become more limited, living walls are likely to become a familiar feature as the industry seeks to adapt to rising environmental pressures. Paving the way for greener approaches to development, living walls are becoming a powerful weapon in overcoming the cost of construction, transforming buildings and skylines into urban forests.