Chelsea Flower Show garden designers take inspiration from all manner of things both simple and profound and for Brewin Dolphin Garden designer Darren Hawkes it was almost a Eureka moment. Hawkes said “The idea came in a flash and was influenced by many things that had been running through my mind. In particular an exhibition at Tate Britain in the early nineties entitled Weight and Measure impressed me greatly.  It featured huge steel cuboids sitting in the main gallery and impact of these gargantuan shapes has remained with me and subliminally has had a big influence on the layout and drama of this garden for Brewin Dolphin”.

Darren’s first Chelsea Flower Show garden was in 2013 and it was just after returning home to Cornwall that he was walking through a small wooded area and he became entranced by the unfolding of the woodland ferns and umbellifers and thought how wonderful it would be to capture that freshness and fragility and bring it to Chelsea. Darren was keen to explore the drama that rigid, heavy, monoliths seeming to hover above tender new growth, would bring to a garden.  The implausibility of putting the two together excited him and drove him forward.

Within a day or two the idea of huge floating platforms suspended above the planting crystallised and from a model of cereal boxes on a kitchen table the garden concept developed and will be revealed for Brewin Dolphin on Monday 18th May.

Reflecting Brewin Dolphin’s heritage was always a firm part of the brief and Darren was interested in the way in which a company with such a hugely successful past finds new ways to reach out to potential customers without alienating the traditional client base.   Darren’s use of traditional materials and familiar plants within the garden combined with the slate monoliths, he feels is totally in keeping with Brewin Dolphin’s heritage and appropriate modernity / forward thinking ethos.

A team of five people cut over 40,000 pieces of slate by hand, which were then glued together one piece at a time to form the surfaces of the floating platforms. This feature is sure to attract both praise and possibly raised eyebrows from the visiting public.  The platforms and vertical monoliths are also strongly suggestive of both 1930’s architecture, prehistoric dolmans and quoits.  Love or hate them their impact will not be denied!

Playing with time and light is possibly a signature of Darren’s and in this garden one of the most fun elements will be following the sunlight which passes through the hole in the high platform as it works its way across the planting beneath.  If the sun shines bright enough, at midday, a well beneath the platform will be lit up from this beam of light.

The main hard landscaping materials in the garden are granite and slate plus an accent of distressed steel used for the front railings, which although will serve to keep the public off the garden are actually an integral part of the design, creating a feeling of being part of a greater landscape. The paving throughout the garden is of reclaimed granite flag stones, originally from an old Cornish farmhouse and likewise the boulders for the dry stone wall are also reclaimed from an old farm.  There is a lovely contrast between the intricacy and detail in the slate work to that of the big natural boulders of the dry stone wall.

Darren said, “The hard landscaping of the garden is so integral to its success.  I really hope that not only are the public intrigued by the layout and the sculptural formation of the platforms and monoliths but that as they look closer at the detail they will be blown away by the work that has gone in to making this year’s Brewin garden something quite unique”

Landscaper Dan Riddleston from Bowles & Wyer Contracts said, “Following a meeting with Darren last week, the Bowles &Wyer landscape team are really enthused about the quality of the hard landscaping materials that we are working with on the Brewin Dolphin Garden. The floating platforms are quite something to behold and are rather complex feats of engineering both above and beneath the ground, so it’s not without challenges but one that we will relish”

Lighting is subtle, understated and designed to create atmosphere.  The lighting is provided by Collingwood with emphasis on under-lighting the trees and platforms and illuminating the gaps between the pathways creating an atmospheric glow.

The garden as a whole will have the feeling of being slightly unkempt with a sense of having a past. Evidence of previous use is seen in an underground stream that spills from rills and can been seen running through open well heads before entering in to a pool at the front of the garden could suggest some kind of mining past or other commercial use.   It is a garden that demands people engage with it as they step from one level to another crossing over plants and leaning out over the water and although it is rather abstract and sculptural it also evokes tranquillity.

The public will have access to a paved section of the garden that will enable them to look across the space rather than at it from just the front as has been the convention with Rock Bank gardens at previous Chelsea Flower Shows. 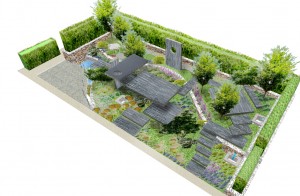