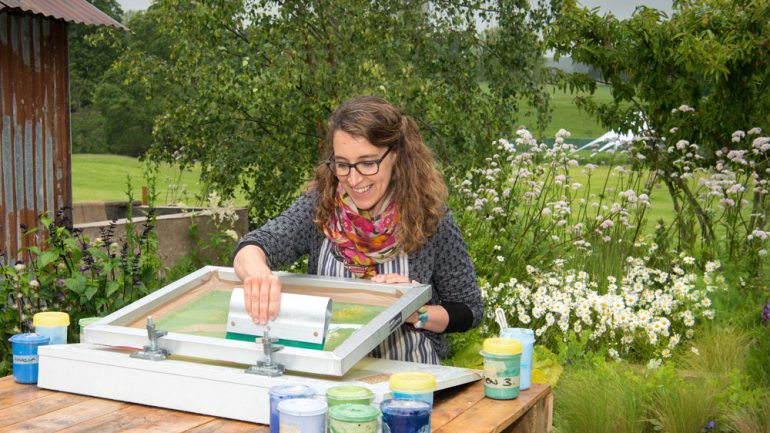 Hannah, known for her nature-inspired screen prints, created a sketch of a Chicory plant (photo 1) before turning this into an intricate print live on the Brewin Dolphin Artists’ Garden (photo 2). Chicory has been chosen in the plants used on the garden because of its striking blue colour and distinctive wellbeing properties.

Paul says: “The idea of the Brewin Dolphin Artists’ Garden is to create a space which celebrates craftsmanship and an appreciation of skills. Just as you value the work of an artisan ceramicist, or a willow basket maker, as they have invested their skills and time, and so through this garden of makers we are also celebrating the skill and value of those caring for and nurturing our family’s wealth, especially in uncertain times.”

As well as Hannah McVicar, the other featured artists on the garden during the show are international ceramicist Gregory Tchalikian (also known as Tzarig), figurative painter Maeve O’Loughlin, and basket maker and sculptor Maggie Cooper. All the artists are deeply inspired by nature and use the natural world in all its forms.