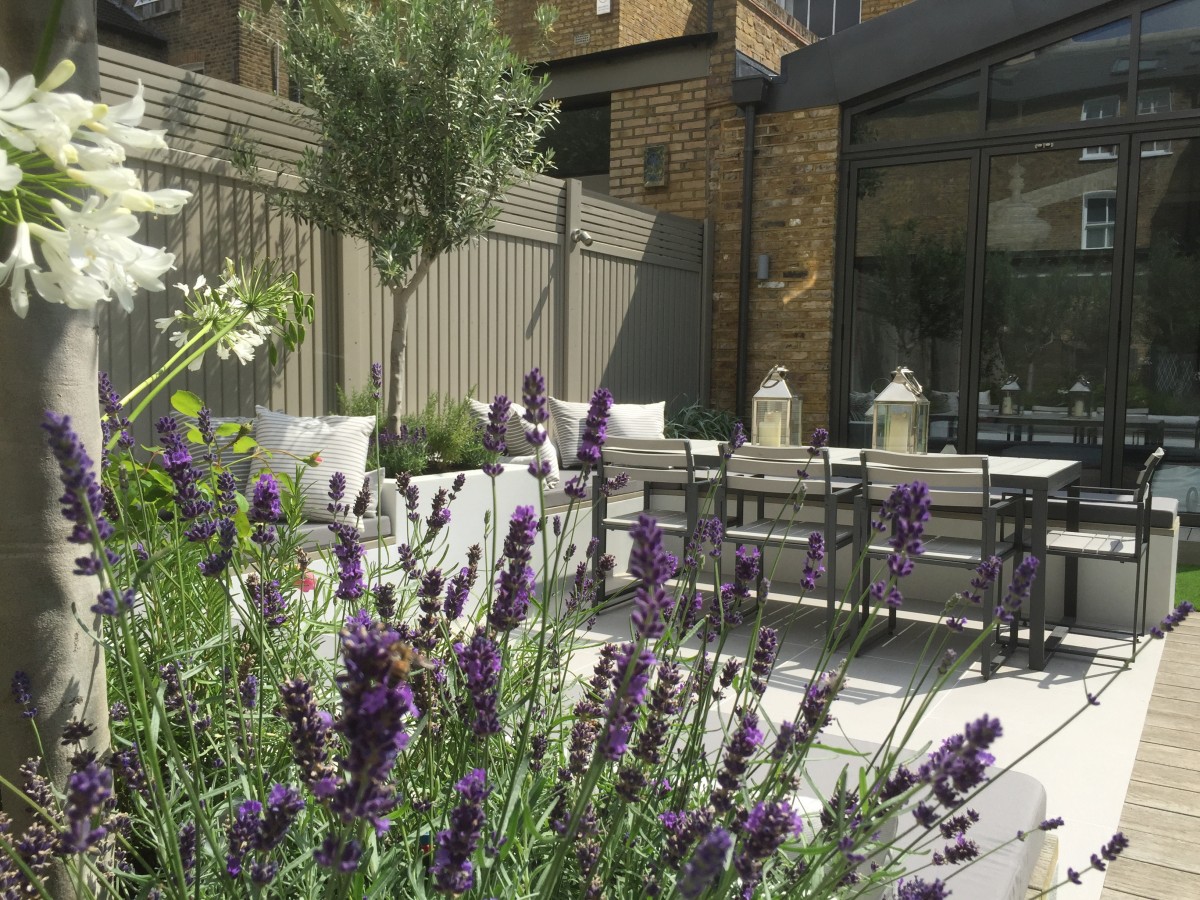 This young professional couple with four children approached us for complete renovation of their large rear garden in Clapham. They had recently had extensive
work done to their property with a stunning back of house extension new kitchen, large folding doors and full refurb throughout the house.

This wonderful and unique (with indented middle section) back of house renovation meant they now looked at their exterior space – a larger than usual plot for the area
24/7 and their existing quaint traditional formal garden was not in keeping with their lifestyle.

There are a young and active family with three children all under the age of seven and the compartmentalised fussy existing set up needed to be replaced with a large open
child friendly play area and entertaining space. They wanted areas for seating and socialising required for both their large extended family and their friends. They liked the idea of lounging but also of dinning and were hoping for an area that could be used more frequently than must the hot summer months.

They also liked cooking and a bbq of some sorts was required. The children required space with a large as possible lawn either artificial or real, some sort of play area and the entertainment area should also take their needs into account. At the end of the garden was the coach house a detached one bed flat with access from street size but also in the back right-hand corner of the garden.

The views from the house which had been acknowledge as hugely important meant the style of the interior should play a large part in design choice for the exterior. Internal grey wood effect tiles, minimal handless grey kitchen, large grey L shaped sofa comprised the areas directly adjoining the house and it was discussed that the exterior might follow suit.

The levels of the interior floor at the base of the new doors meant there was a drop down into the garden and it was a key consideration whether to step straight into the
garden or to have some sort of terrace. Additionally both fences were shot and the first fence between the neighbours garden needed replacing and the street side fence the same allowing for access, privacy and security.

The two clients were in friendly dispute about whether the garden should be low maintenance and bold with regards to planting design or if it should be more planterly
and softer, with a more traditional feel. The husband loved garden lighting and was very keen to have as much as economically and visually possible. It was agreed that this would enhance the views all year round from the inside. Overall a open plan stylish and modern family garden was the preferred type of design required.

The boundaries were our first consideration, I wanted to use a style of fence that was both traditional and contemporary and tied in with the style of the Victorian town house
and its new modern conversation. A traditional tongue and grove panel was opted for with contemporary slatted trellis painted in a complimentary colour to the home. The levels were next on the agenda, I felt due to the size of the garden we would be able to have a terrace extending at the same height as the internal floor stepping down approximately a quarter the way in to
the garden whilst leaving us the remaining significant part of the garden at one level. We chose a grey composite deck as our initial material, this also helped alleviate any damp and drainage issues and would also give a soft feel for small bare feet running around with all doors open.

I still wanted there to be a decent sized level area for when the doors were open for level continuity and also so that they could pull out their kitchen table out on to the terrace is they so wished. We then installed the step down beyond this onto the large lawn in this instance we opted for artificial due to maintenance and all year round look. The next step was to design the entertaining and seating area, the position for this was for the west facing side for late sun away from the passing pedestrians and cars on the roadside. Two areas were devised, one for lounging and one for upright seating and these combined with raised planters comprised the construction on the large porcelain patio. The seating sizes were considered with the number of people in mind and seating style was chosen to allow movement and flow around the area. Along with a decking strip running in line with one corner of the extension to frame the patio I chose this matching product to cap our seating for when the cushions had been put away. A stand along table and chairs were to be chosen to sit alongside the low bench and a fire pit as a focal point for the day bed seating opposite. Beyond this I felt it best to place the children’s play equipment, a bespoke tree house and climbing frame was proposed but currently a simple artificial lawn and trampoline has been installed as a temporary measure. The raised beds of the entertainment area with the planting choice serve to partially screen this kid’s area from said area and the house. Access to the coach house remains here as well. The long side of the coach house was parallel to the back of the main house and the London stock brick work was the back drop to the garden and to flower beds and feature planting I opted for in front. An additional matching bench was positioned centrally to the house with three feature pots planted by its side. To the left of this a large feature birch partially screening the cushion storage in the corner. Along the left side I chose to have a bespoke but simple BBQ with easy access from the house and coupled with this a third seating area so that the chef has someone to share a beer with while he cooks. Beneath the BBQ cupboard was made with doors to match the trellis for continuity.

For cohesion and style we chose a simple pallet of colours and materials one deck choice, one paving choice, one main paint colour all tying together for one harmonious
style. This neutral pallet was to be lifted by the planting which whilst largely green, grey and white was to be enhanced by splashes of colour purples and pinks.

The lighting plan was set up on a four way remote control with ground lights, up lights, wall lights and fairy lights.

External spaces can add significant value to ‘lifestyle’ for both private residences and commercial landscapes.

Patricia Fox founder of award winning Landscape Architects Aralia, explains some of the key trends within the industry, and how...